Welcome to the Dungeons & Dragons Lore Wiki, an encyclopedia of official first-party D&D canon from 1974 to the current day.

We need editors! See the editing guidelines for ways to contribute.

A character race of magical earth-fey, the rock gnomes are tricksters and inventors, skilled with illusion and deeply in touch with the natural world. They are often found alongside burrowing creatures such as badgers and wolverines.

Gnomes are a race of diminuitive, fey humanoids, skilled in illusion magic. They are close to the earth, like gnomes, but represent its more magical and jovial side. They live in tunnels in wooded hills and have an intense curiosity about the world. They are often great crafters (if a bit distractable), and peerless sages of the world and its phenomena. They have a rivalry with kobolds that is truly ancient, and have antagonism with goblins and giants of various sorts as well. The gnomes chiefly worship Garl Glittergold called the Watchful Protector, a deity of protection and trickery.

Described in Monsters & Treasure as essentially smaller, more reclusive dwarves who live in the hills rather than in the mountains.

In Blackmoor, they are noted as living in air-filled caverns "on the bottom" (presumably, given the aquatic-themed monster list here, at the bottom of a body of water), connected to the surface world via tunnels.

Gnomes are greatly expanded on in the Player's Handbook, as they are one of the core races of AD&D. Perhaps notably, they did not have a bonus or penalty to their initial ability scores. At this point in time, they were not differentiated as Rock Gnomes.

Additional information was provided on the gnome in the Monster Manual. Rather surp risingly, they are described as having clerics in the MM, but are not allowed to be clerics as PC's.

They appeared again as one of the core PC races in the Player's Handbook. They are noted as kin to dwarves, but smaller. They are described as having very large noses, tan or brown skin, and white hair. They live for about 350 years.

Gnomes live in areas of rolling, rocky hills that support ample forests but that are not inhabited by humans. Sly, furtive, and suspicious of larger races, they are reserved, except among dwarves. They find their kin's aversion to surface dwellers foolish.

In the Monstrous Manual, standard gnomes were revealed to be Rock Gnomes, and three other sub-races were introduced: Svirfneblin, Tinker Gnomes, and Forest Gnomes. Here it was also noted that multiclass gnome characters are more common than multi-class characters of other demihuman races.

Gnomes dwell underground in hilly, wooded regions, pursuing their interests in peace. They resemble small, thin, nimble dwarves, with short, stylishly-trimmed beards and enormous noses that they take great pride in. Rock gnomes have skin of dark tan or woody brown (with an occasional hint of gray), pale hair, and eyes in shades of blue. Gnomish clothing tends toward leather and earth tones, with bits of bright jewelry and embroidery. Rock gnomes live about 450 years, though some ancient gnomes can live to 600 or more.

Gnomish is its own language, with each subrace speaking a distinct dialect. Gnomes often learn common, kobold, goblin, halfling, and dwarf to communicate with those nearby, and some Rock Gnomes can speak with burrowing mammals in a language of grunts, snorts, and signs. They possess the vision, stonecunning, racial enmity, and magic resistance mentioned above (though it is mentioned that "giant-class creatures" all take the -4 penalty).

Gnomes favor short swords, hammers, and spears as melee weapons, with short bows, crossbows, slings, and darts for ranged attack. Most gnomes also carry a sharp knife as a final line of defense. They are typically outfitted in studded leather armor with a small shield, but the leaders have chain mail, and gnomes of 5th level and above have plate mail. Gnomes have a 10% chance/level of having magical armor or weapons, and spellcasters have the same chance of also having 1d3 magic items they can use on them.

Gnomes are noted as living in harmony with nature, dwelling underground but frequently visiting the surface.

Gnomes are mentioned as clannish, with rivalries between the families. They spend their lives in crafting fine jewelry and mining the metal for the craft. They also dedicate much of their lives to revelry and enjoyment: there are many gnomish festivals and holidays, usually involving games, nose-measuring contests, and tale-spinning. At the head of gnomish society is a chief, who is advised by a council of clerics.

The Complete Book of Gnomes & Halflings

The Complete Book of Gnomes & Halflings built upon this preliminary lore. Gnomish culture in general is given a wealth of details, and rock gnomes in specific are perhaps the ur-example of gnome-kind. Additional details about gnomes in general can be found under Gnome Society.

Rock gnomes average 3.5 feet tall, and are lightly built, but deceptively strong (no weaker than a human). Their eyes are predominantly blue, but shades of green are not unknown, and rare yellow or brown are also known (and are often said to be omens of one type or another). Their skin ranges from light tan to nearly black, and their hair is white or pale grey by adulthood (though in adolescence it has the normal human variance). Gnomes live about 400 years, but elders can reach 600 or more.

Male rock gnomes are especially proud of their noses, and a test of nose length is in being able to jab it into your rival's eyes without theirs touching you. Female rock gnomes also have large noses that they are quite proud of, but are less prone to rivalry over it. Male rock gnomes also grow beards, keeping them neatly brushed and trimmed, sometimes cut into a goatee or given a long, curling point (or two!).

Lands of the Rock Gnomes

The rock gnomes display no particular preference for climate, being found in frigid lands and tropics, occupying any place with an abundance of natural rock (preferably below the roots of plenty of trees). Their ideal home is an area of wooden hills with a limestone bedrock that can be turned into a network of tunnels and warrens to dwell in. Their settlements are near the surface, with many entrances and air-holes. Many elements of gnomish villages can only be reached by small creatures, including small tunnels and narrow ledges that scale the steeper hillsides.

Rock gnome communities are found within a few days' or weeks' travel of each other, and about once a decade, all the communities get together for a massive festival of about four or five thousand gnomes that lasts for a fortnight. 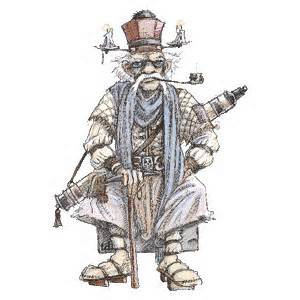 Gnomish couples have private burrows, and children (cousins and siblings) are raised in common, in a central location. Adolescents are segregated by gender in their own room. The private chambers are connected to a central family chamber, where a fire is kept, food is prepared, and all the members of the family gather for talk and socialization. The common room has a chimney, often with a very long passage, and often has some access to fresh air and light - gnomes adore windows. The family burrows connect to other burrows of the clan, and each clan is connected to the others. At each juncture, there are large chambers that in bigger towns contain shops and inns and other common areas for festivals and the like. Rock gnomes are welcoming of their friends, but larger humanoids such as elves and humans might find the space a bit cramped.

Chiefs rule gnomish society, and decide on matters of defense, trade, and arbitration. Gnomes tend to be quite obedient to their leaders.Gnomish communities are often found within a few days' or weeks' walk of each other.

Rock gnomes are said to be the most adept at gemcutting of any gnomish race. They have chosen a diamond to represent their people, and rock gnomes with an abundance of pride will adorn their precious objects with the hard stones. Rock gnomes are industrious and meticulous miners, extracting significant value from the veins they mine (even veins that by other standards would be "tapped out"). The industry is pursued with good humor, songs, and bawdy stories to lighten the load, but the humor rarely interferes with the work. Rock gnomes are also exceptional jewelers, producing fine works of intricate metal, though they don't work much with heavy industrial metals like iron and steel (aside from a few gnomish blacksmiths who are, no doubt, as dedicated and resilient at their task as any other gnome). Like other gnomes, rock gnomes produce little raw material, but elaborate much upon what they do acquire -- they can be skilled carpenters and weavers as well, though rock gnome communities don't often produce much lumber or fabric.

Rock gnomes are bland culinarians, preferring boiled or roasted meat without spice, accompanied by potatoes and mushrooms. They are abysmal farmers, and don't keep cattle (and so don't have milk), and they don't use yeast in their brewing or their bread, producing unleavened bread and drinks of a distinct and divisive quality. Their brewmasters produce heavy ales and meads that are something of an acquired taste, and rarely cause outright drunkenness. They are especially pleasant when served chilled, often employing underground caverns filled with ice harvested in the winter to keep their drinks cool even at the height of summer. Many gnomish inns have ingenious plumbing systems which allows cool ale to flow directly out of a spigot in the main dining hall.

Rock gnome children are carefree, indulged by their elders, and given praise and encouragement rather than harsh punishment. Gnomish children seek, admirably, to please the adults around them. Their parents make enthusiastic prognostication on how large their nose will grow in adulthood. By the time they are 50, a rock gnome is expected to begin developing some useful skill or craft. They are encouraged to experiment and shop around with their activities until they find one that suits them. At age 100, a gnome is considered an adult, and the family hosts a large party, gathering many clans together, that lasts for a month or more. This long-term party attracts gnomes from quite a distance around. Those coming to the party bring a gift for the new adult, and the birthday gnome picks one among them as the finest. The gifts are practical and utilitarian -- boots, equipment, clothing, etc.

Once of age, most rock gnomes have a period of wandering, where they go forth into the world to explore. This may last decades or even centuries, but most gnomes return to their homeland at some point in life, to take up their role in the clan, and to share what they have learned with their people.

They appeared again as one of the core PC races in the Player's Handbook. Here, they were more explicitly about crafting and less about magic in general, though still largely the same as in previous editions. Gnomes are exceptional sages and engineers, often leading the fields of naturalism, herbalism, and mechanics.

Gnomes in 3e have the following racial traits:

The Monster Manual presented a rock gnome warrior as a typical example of the race.

Further elaboration of the rock gnome is given in Races of Stone. The book also adds a bit to Gnome Society.

The gnomes of 4e were more explicitly fey and supernatural than previous versions of the race. Due to their marked difference from traditional rock gnomes, gnomes in 4e may be thought of as a separate subrace of gnome entirely: the Feydark Gnome. 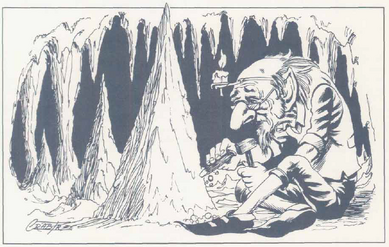 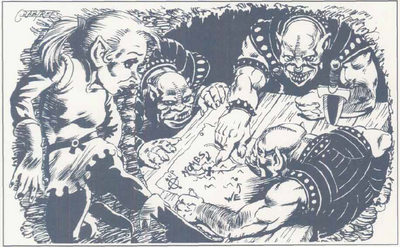 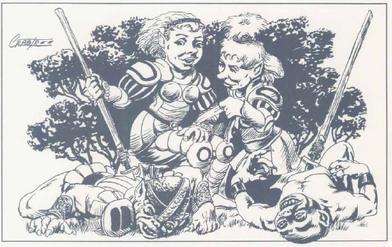 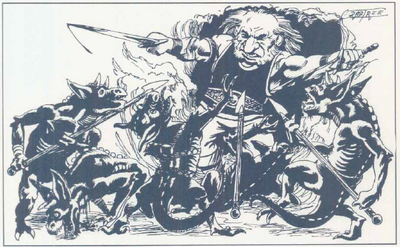 A breachgnome defending againt a group of kobolds 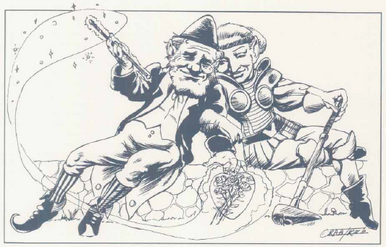 A pair of rock gnomes in love 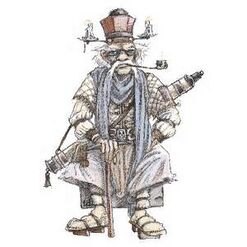 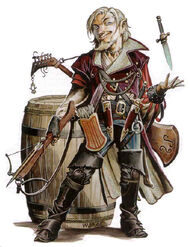 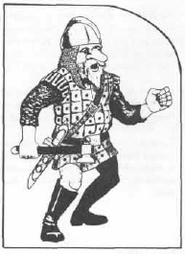 A gnome from the 1e Monster Manual - note the nose 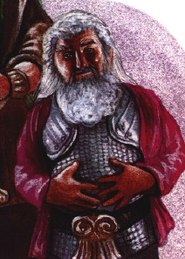 A gnome from the 2e revised Player's Handbook. Also note the nose. 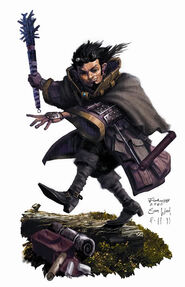 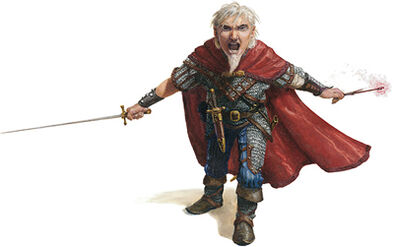 Gimble in a moment of bravado 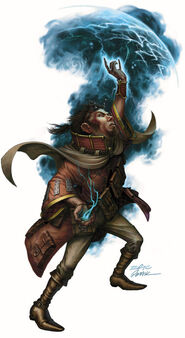 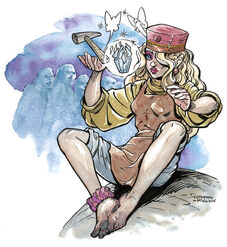 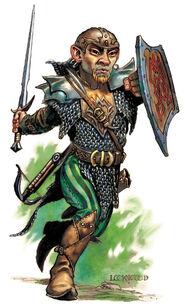 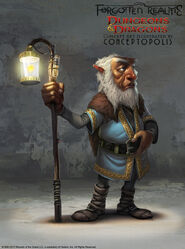 Concept art of a 5e gnome

Community content is available under CC-BY-SA unless otherwise noted.
Advertisement