Creates multiple images of the spellcaster. 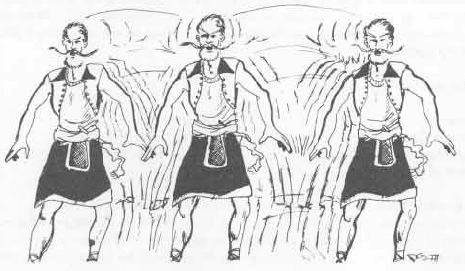 Debuted in the Player's Handbook as a magic-user spell

Up to four duplicate images of the caster come into being within the spell's area. To determine how many images appear, roll d% and add +1 per caster level (25 or less = 1 image; 26-50 = 2 images; 51-75 = 3 images; 76 or more = 4 images).These images do exactly as the caster does, and it is impossible to tell which image is the actual caster, and which is a duplicate. The images shift and blur from moment to moment, making targeting unreliable. If an image is struck by an attack, it winks out.

This spell creates duplicate images of the caster that move as they do, making it impossible for an enemy to determine which one is the real caster. It creates 1d4 images, +1 image per three levels of the caster (maximum of 8 images), and when an image is struck, it disappears. If the caster is struck, no image disappears, but the spell remains in effect: any attacker must roll to see if they hit an image on their next attack as well.

Retrieved from "https://dungeonsdragons.fandom.com/wiki/Mirror_image?oldid=10086"
Community content is available under CC-BY-SA unless otherwise noted.