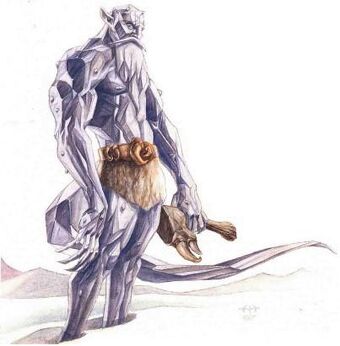 Immoths are creatures that originate in the Elemental Plane of Ice. They can be found all over the planes, seeking knowledge and lore to add to their libraries of frozen thought in their home, the the Mountain of Ultimate Winter.

The immoths use these frozen abstractions like tools, knowing the secret of their unlocking. They also wander the "warmer planes" in search of knowledge and ideas to encapsulate in these shards of ice, to return them to their home, where they can be put to use.

In fact, one legend states that the immoths were brought into being by a powerful spellcaster (perhaps one of Cryonax's reportedly enslaved mutators), but refused to obey her. So she cursed them to forever search out the words she spoke, all accross the planes. The immoths search for her words far and wide in the hopes that the curse placed on them will be lifted.

Immoths are tall creatures -- eight foot beasts whose bodies seem like they are carved from silvery ice, complete with shard-like beards that grow with their age. They have long, icy talons on their fingers and feet that they use to attack when threatened. They also have a long, surprisingly sinuous, icy tail that carries a potent venom. This sap-like poison makes those afflicted with it babble whatever words come to their lips. They babble each word only once, however, and after that, it is "lost" to them forever (or at least until they get the poison out of their system -- assuming the toxin doesn't kill them).

Immoths are aslo studded with various frozen concepts, some of which they can employ in battle, releasing the energy stored in them. In combat, they have been known to be able to freeze an enemy's attack, only to unleash it against them at a later time.

Retrieved from "https://dungeonsdragons.fandom.com/wiki/Immoth?oldid=13988"
Community content is available under CC-BY-SA unless otherwise noted.